I once consulted for a manufacturing startup who could have benefited greatly by adopting a lean marketing approach. As I arrived on the scene, it was clear they were desperate to make up for revenue they had lost in a recent marketing campaign. They were bewildered at how poorly their campaign had performed.

At first, everything seemed to be going well. The marketing agency with whom they were working with defined buyer personas, developed a content strategy, researched keywords, and built landing pages. The marketing strategy was thoroughly presented to a marketing committee the startup had designated. Email blasts were prepared and an aggressive Google AdWords campaign was set up and ready to go. Then the campaign launched. And everything went wrong.

The AdWords campaign was spending far more money than the sales it was bringing in. The email blasts had a click-through-rate too low to accomplish much of anything. Most users were bouncing from landing pages without completing the call to action. Three months into the campaign, the startup had spent most of its marketing budget for the year and had very little to show for it.

Shortly after, I was hired to consult with the startup on what had gone wrong and how to change the results of the next campaign. The problem was clear to me: too much was launched at once. The startup should have used a lean marketing approach to their campaign. 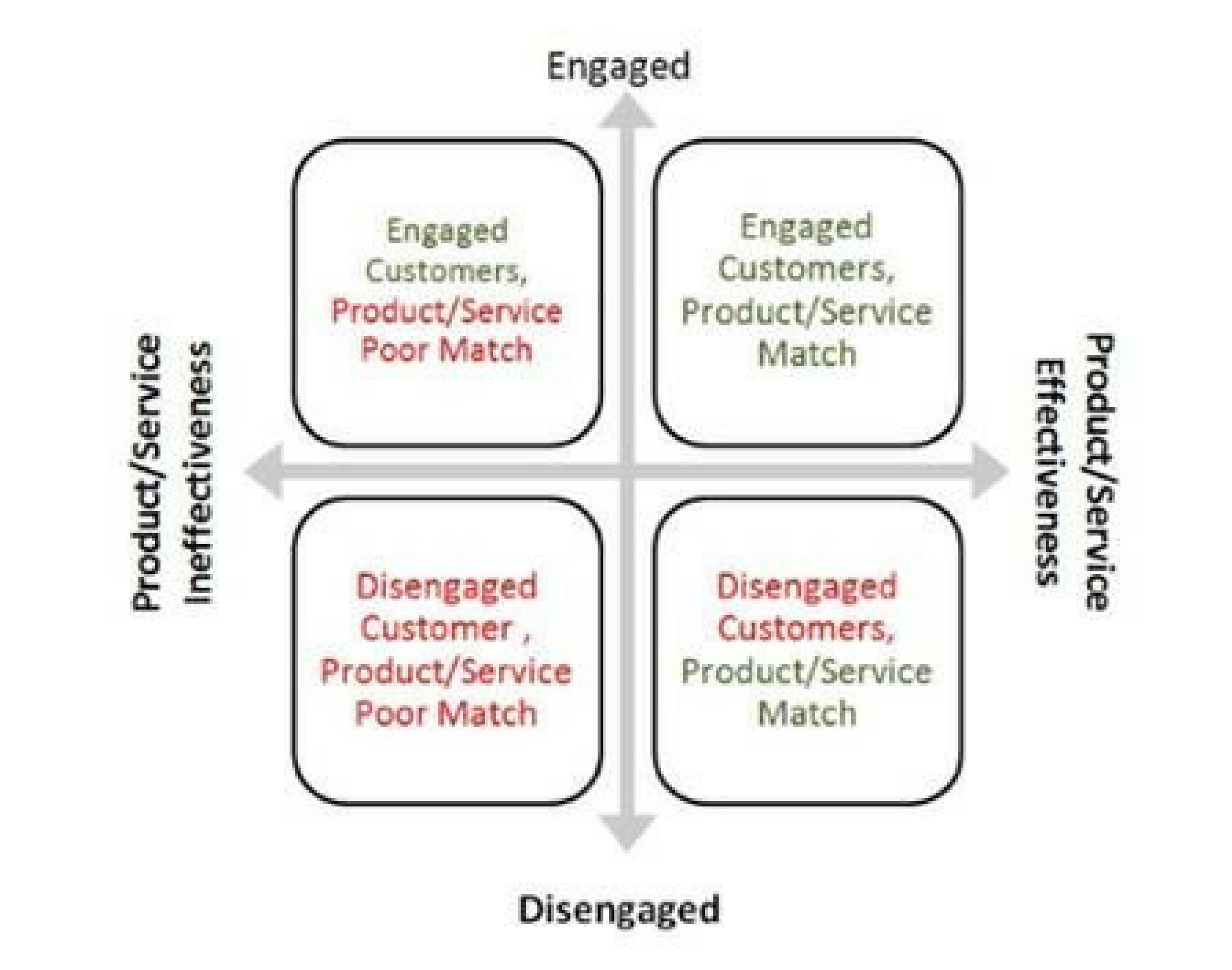 If the marketing campaign had been run with a lean approach, the agency would have set out to find the greatest chance of success in each tactic deployed. Next they would take expedient and meaningful actions to confirm or deny what opportunity exists with each tactic. Then a refining process would take place, and the next iteration would launch. Confirming whether opportunities exist is based on the model pictured above. If the customer is engaged and the product is a match, you have an opportunity.

To get a clear picture of what lean marketing is, the Lean Marketer has a helpful definition:

“Lean Marketing is about being agile, about viewing each campaign or marketing activity as one step in the ever-improving progress towards customer acquisition and ultimately customer satisfaction.”

Now let’s take a look at the four elements of the marketing campaign run for the startup and how those could be reworked using the lean method.

Lean Personas by Adrian Howard from Mind the Product on Vimeo.

The marketing agency had the right idea by setting up buyer personas. Buyer personas include integral information about customers like characteristics, relationships, motivations, personal needs, and where they spend their time. However, the marketing agency could have done better if they realized that personas for startups, with few customers, rarely end up being true. Also the target market usually shifts from what it was first thought to be after launch. Since all the money set aside to create personas was spent before launching the campaign, the shift in target market was missed.

With a good lean marketing plan, buyer personas should be set up tentatively and then proven true over time. Adrian Howard shares a smart technique for creating lean personas in the video embedded above. Howard suggests a small team come together and list characteristics, traits, motivations, needs, and relationships of potential customers as best they can. It’s okay if this is even just the co-founders. All “facts” gathered in this meeting should be written on post it notes so they can be moved around. The group should then organize them from what they’re least confident is true to what is most likely true. From there, the group should create a table where they can further refine the “facts.” As the campaign is rolled out, they’ll find out which speculations are true, which are false, and be able to add some new ones.

Once real facts have begun to be gathered by analyzing the data collected from completed sales, the team should create rules for how to move the post-it notes between buckets or determine them as untrue and remove them completely. Rules should be based on how often a characteristic comes up when reviewing lists of buyers who purchased. Finally, the facts should be realigned on a regular basis as more is learned about how buyers are using the products.

With setting up lean personas that change monthly rather than setting and forgetting, the marketing agency could have realized the initial personas didn’t hold true after launch.

Hubspot has proven to the world that email blasts are still viable but only if they’re providing relevant material to potential buyers. Therefore, there is a lot to learn about what potential buyers care about and each blast should be what we’ll call a “minimal viable email”.

Let me explain what I mean by “minimal viable email”. The Hubspot method suggests that emails give the recipient something useful. Depending on what part of the sales funnel the recipient is in, free content like a white paper, infographic, one pager, etc. would be offered. I have coined a phrase playing off of “minimal viable product” to suggest you spend no more time creating the offer than what is minimally viable since we’re anticipating some of the initial emails to fail to get clicks.

The manufacturing startup’s initial marketing campaign made the mistake of spending too much time and money perfecting email offerings and sending them out with an expectation of a strong return. Instead, the campaign should have employed a testing and refining cycle. 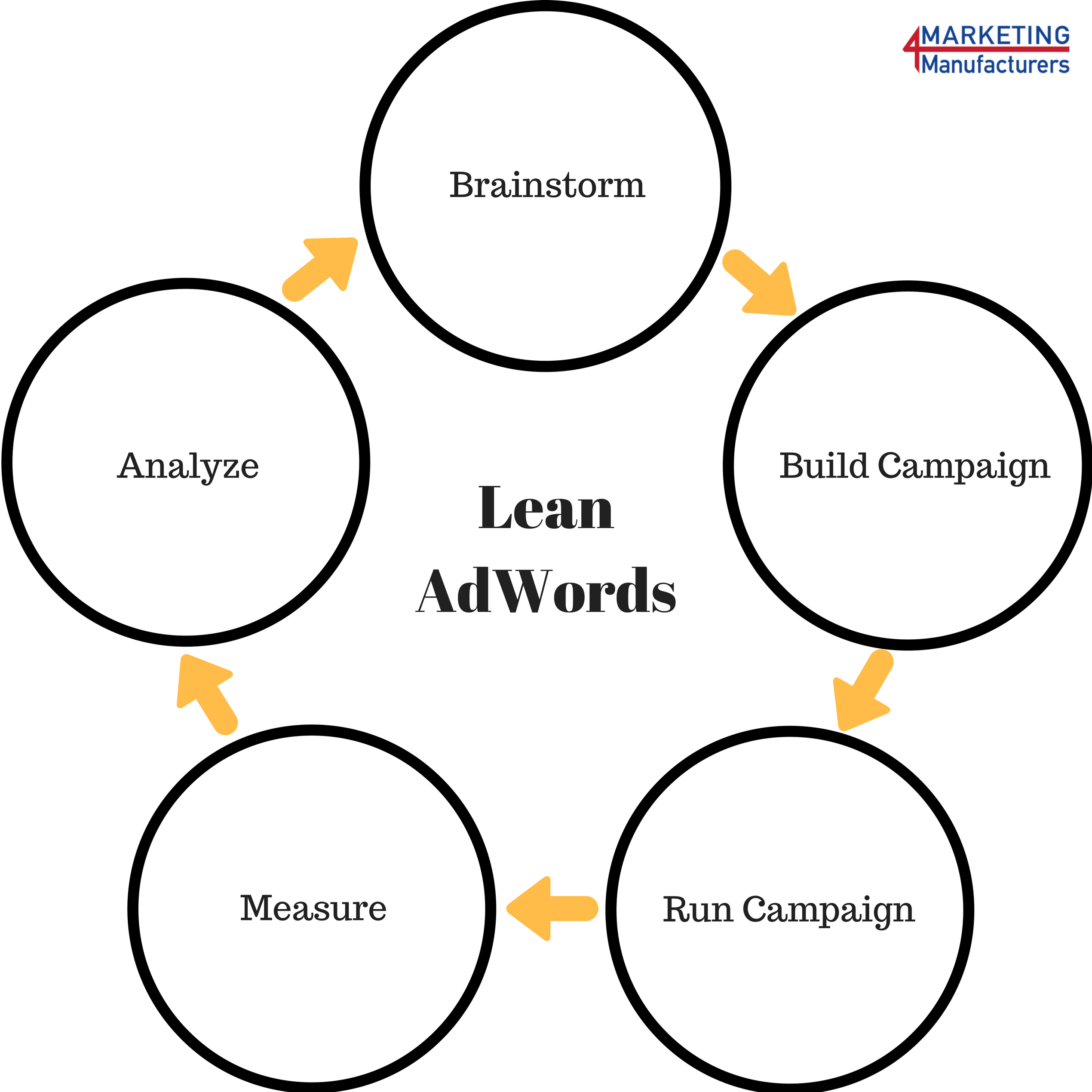 The marketing agency had certainly put in the effort on the AdWords campaign. They had carefully created lists of keywords, ad copy that seemed like it couldn’t fail, and set bids that would get their ads on the first page of results. Then they launched a large number of ads at once, kicking off the launch of the startup’s product. The problem was, the ads they thought were foolproof didn’t perform well once launched.

The lean method suggests they should have launched only a few ads at a time and with only a small percentage of the budget spent for each. Once they had analytics from the first few ads, patterns, successes, and failures would become visible. Some keywords would have triggered unwanted search terms. Some ads would not have performed well. Some bids would be a higher spend than necessary.  The analytics gathered from running the campaign should have been used to refine the elements of the ads and keywords. A new campaign should then be launched and then refined again. A lean cycle AdWord’s campaign is pictured above and copied below:

Had the campaign utilized this method of testing and analysis from the beginning, changes would have been made as soon as low performance was noticed on any of the elements and would have brought in a more acceptable number of customers.

Any time a landing page is created, split testing should be performed. There’s no reason to lose clicks when a small change in wording, layout, or color would have made the difference.  The marketing campaign employed for this startup created landing pages and forgot about them. As the campaign progressed throughout the three month period, the call to action clicks could have been a lot higher if each page was tested against another version of itself to see which got more clicks. A good tool for A/B testing lading pages is Instapage. It’s fairly low cost and has A/B testing automatically built in.

Using Lean Marketing For Your Company

It’s unfortunate to hear about an innovative American manufacturing startup losing a lot of money on a failed marketing campaign. Luckily there was enough money left in the marketing budget for the year that we were eventually able to build and nurture a successful campaign.

For the rest of the manufacturers reading this, I recommend you  apply the tenants of lean manufacturing to your marketing plans for the maximum success and least amount of budget lost.

If you’d like additional assistance with your lean marketing approach, please submit the form below. We’re here to help you realize your full potential as a manufacturer — let’s chat about your opportunities!

This post contains an affiliate link for Instapage which means that if you click on it and purchase from them, I’ll earn a small referral fee. This affiliate link was added to this post as an after-thought.

Get great marketing advice in your inbox about once a month!

Get valuable marketing strategies and tips that you can actually use!